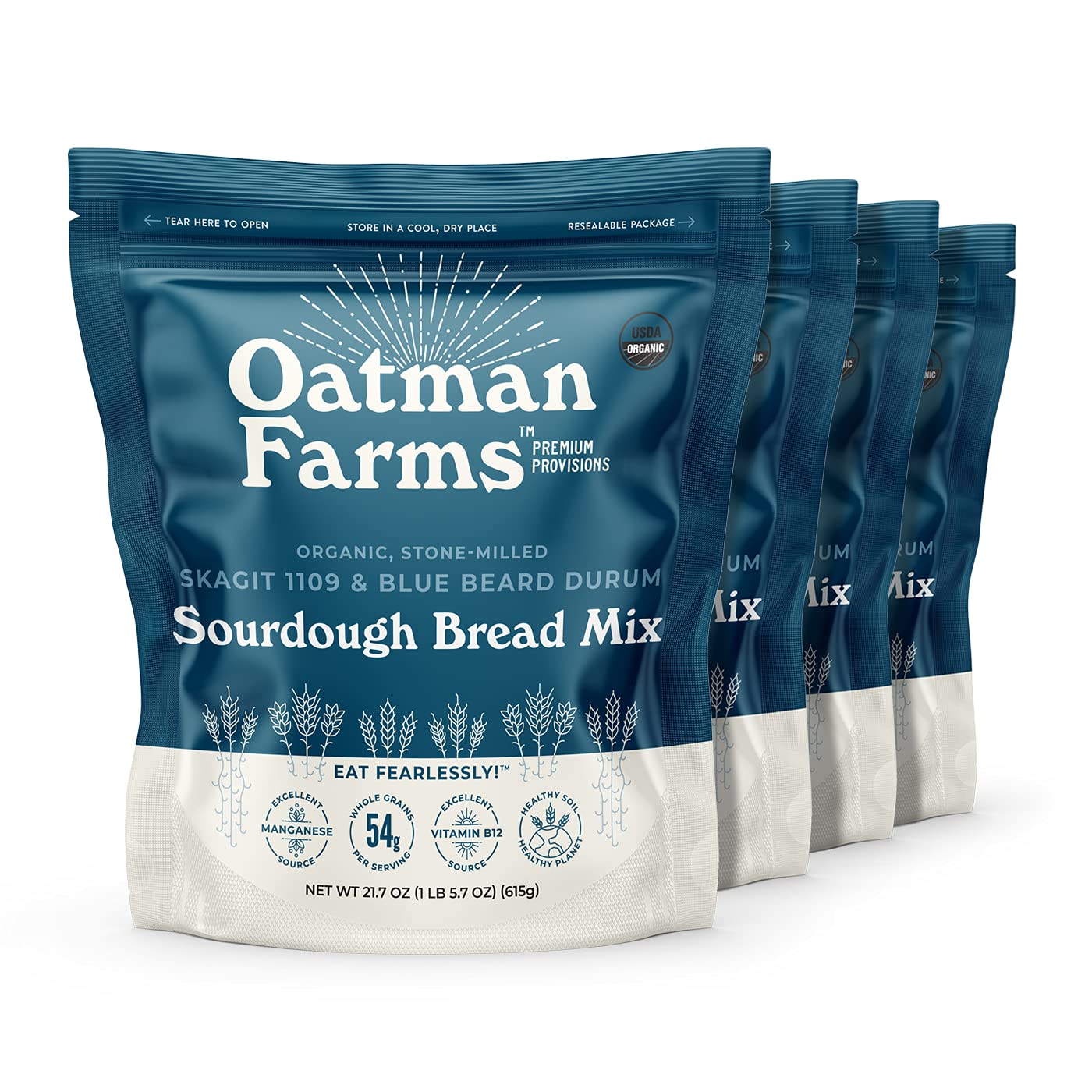 Oatman Farms is a fearless food company with a mission to revitalize and sustain family farms in hot and dry desert environments, including our own Oatman Flats Ranch, the Arizona farm that has been in my family for four generations.

Our commitment is to develop the best tasting whole grain, nutrient dense, baking mixes. Oatman Farms and our farm, Oatman Flats Ranch, are excited to (re)introduce our customers to once-widespread heritage wheats, like White Sonora and Blue Beard Durum, and modern varieties like Skagit 1109, by transforming them into delicious regenerative organic baking mixes.

These statements have not been evaluated by the Food and Drug Administration. This product is not intended to diagnose, treat, cure, or prevent any disease.

Processed in a facility that uses milk, fish, eggs, tree nuts and soy.

3. While dough rests, line a medium sized bowl with clean dish towel. Dust bowl generously with flour. Using a pastry scraper, form a tight round dough ball. Lift it with the pastry scraper, place the top of the ball in bottom of bowl, seam side up. Pinch seam together. Sprinkle with flour. Cover lightly with towel.

4. Allow dough to rise for approximately 40 minutes and then place Dutch Oven in the oven and preheat oven to 500Â° F.

5. Once the oven has reached 500Â° (approximately 35 minutes after dough has risen), touch top of loaf lightly. If imprint remains, it's time to bake. If the dough bounces back, it needs an additional 10 minutes.

6. Cut a parchment strip, 9'' by 18". Place parchment strip over loaf. Turn bowl out onto counter. Quickly score top of loaf with single edge blade to allow expansion in oven.

9. Bake an additional 20 minutes, to 210Â° F internal temperature. Remove from oven. Cool on wire rack at least one hour before cutting.

Baker's Note: The above cooking temperatures are based on a conventional oven, not convection. If convection, lower temperature by 25Â°F.

3. Gently pull dough into a rectangle; fold one end to the middle, fold the other end over it. Turn dough 90Â° and roll up tightly, pinching the seam and ends to seal. Place in pan, seam side down; cover and let rise 1 hour 30 minutes. Preheat oven to 375Â°F.

4. Bake about 1 hour 10 minutes, until richly brown. Let cool 20 minutes in pan, then on a rack until completely cool before slicing. Enjoy!

Baker's Note: The above cooking temperatures are based on a conventional oven, not convection. If convection, lower temperature by 25Â°F.

What Is Normal Blood Pressure Range?

While blood pressure fluctuates throughout the day, learn what is normal and know the warning signs and symptoms of high blood pressure.

The Pandemic's Impact on Mental Health

In Canada, Ban on Menthol Cigarettes Had More Smokers Quitting

What Is the Normal Blood Pressure Range?

19 Tips on How to Stop Coughing

How Late Can a Period Be Before You Know You’re Pregnant?

Get the MedicineNet Daily newsletter for health tips, wellness updates and more.

By clicking "Subscribe Now", I agree to the MedicineNet Terms and Conditions and Privacy Policy. I also agree to receive emails from MedicineNet and I understand that I may opt out of MedicineNet subscriptions at any time.

Is It Safe to Put Hydrogen Peroxide in Your Ear?

Is It OK to Take Melatonin Every Night?

How Long Do You Need to Fast for Autophagy?

How Can I Raise My Iron Levels Fast?

What Is the Fastest Way to Get Rid of Gnats?

What Are the 3 Most Important Things in a Marriage?

Health Solutions From Our Sponsors

Health Solutions From Our Sponsors